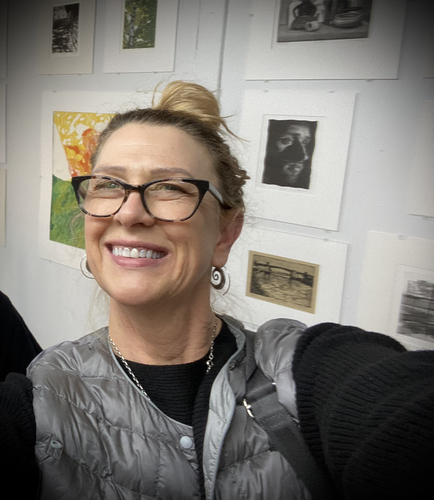 Born in Chicago, Illinois, DeAnn L. Prosia has been creating and selling art works since 1990. She received her education at Northern Illinois University and the Art Institute of Chicago, but her interest in printmaking came later when she met a Chicago printmaker whose work caught her eye.  Over three days he taught her the basics of printmaking.  A day later she ordered her first printing press from Blick and set it up in her studio apartment.

Until 2006 her efforts mostly concentrated on etchings. It was not until she was living in Germany (December 2006 – October 2009) when she decided to use her love of drawing and her interest in color to experiment with watercolors. Through a lot of experimentation and the influence of the European art scene she developed a style that, she feels, is quite opposite of the tightly knit feeling that her etchings offer.

DeAnn is President of The Society of American Graphic Artists and currently lives and works in Morrisown, New Jersey.

Notable Collections:
DeAnn is an avid collector of prints and likes to travel, hike and has spent the night at the bottom of the Grand Canyon and has been inside one of the great pyramids of Giza, Egypt.
Loading...